On August 16, 2011, 74 freshly cut Red Spruce logs were delivered to Caribou Gold Mines by JD Irving Ltd. Members of the Icelandic Memorial Society of Nova Scotia had been anticipating the delivery. When the log truck rounded the bend of the road we cheered, as this was the first step in the actual construction of our log kiosk. During late August and September society members gathered for log peeling work parties. The chore seemed daunting as we approached the pile of 20 foot logs, knowing time was of the essence, as the longer the logs sat in the sun the harder they would be to peel.

Drawknives, hatchets, lawn edgers and a small tool called a log wizard were all used for log stripping. As we peeled we entertained ourselves with stories and work songs. One log at a time from each end of the pile was peeled with 2 or 3 people to a log. We talked about the Markland settlers and wondered if they would have peeled the logs for their cabins. What tools would they have used. As we do not have any documented proof we decided that peeling might not have been an option for them because of the time it would have taken and the lack of proper tools.

Spring is here and the logs have wintered well. On May 5th a work party was held to remove the knots and prepare the logs for building. Most of the logs are 8-12 inches in diameter, which will make them easier to handle. Our goal is to cut and notch the logs and construct the kiosk on the site where the logs are piled in nearby Caribou Gold Mines. We will then disassemble the kiosk and transport it to our lot in Markland where it will be re-erected. Site preparation has been completed on the lot with the area grubbed, levelled and a load of gravel spread for the base. Robert Dillman, local contractor, completed this work in October.

Henry Decker, prominent local woodsman with many years of experience in the lumber industry was our guest speaker at the Society's Annual General Meeting on May 6th. Henry told us of his log building experience, which goes back more than 60 years. He shared valuable tips and expertise. Henry has offered to provide consultation throughout the building of the kiosk. Wade Prest, a society member has offered to cut logs from his Markland lots for the floor and roof of the kiosk. Wade will mill them into planks at his sawmill in Mooseland. Wayne Scott, an executive member of our Society has years of experience in the construction industry and has been researching and documenting log cabin construction from the late 1800s. Wayne is our construction foreman. Other members of the society have experience with log cabin building and are eager to begin. Construction will begin in early summer.

The kiosk will be built as closely as possible to the descriptions from our records and so we have been gathering old hinges, latches and windows from the local area used in the late 1800s. We are excited about this historical project and hopeful that it will be a lasting and informative testimonial to the hardy and resilient Icelandic settlers of Markland.

The Society gratefully accepts donations toward the construction of the kiosk and wishes to thank all donors, members and volunteers who have helped to make this project possible. 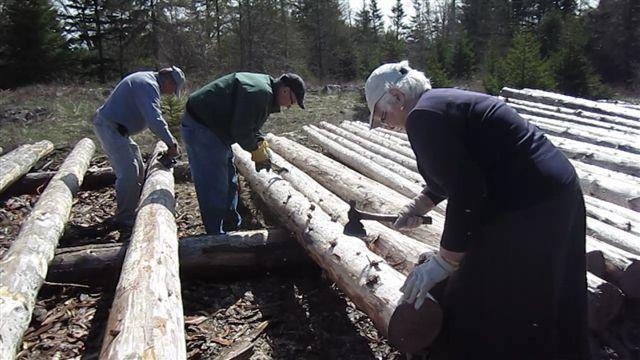 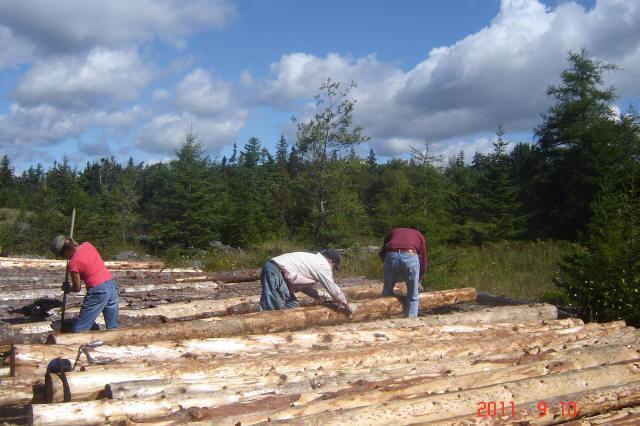 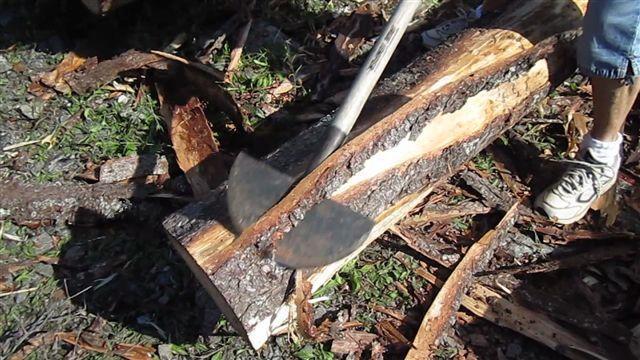 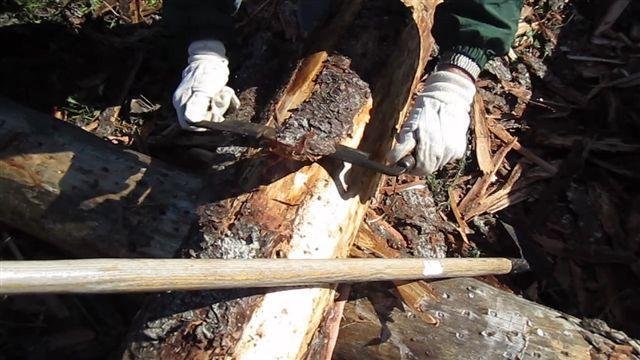 Close-up of a draw knife in use. 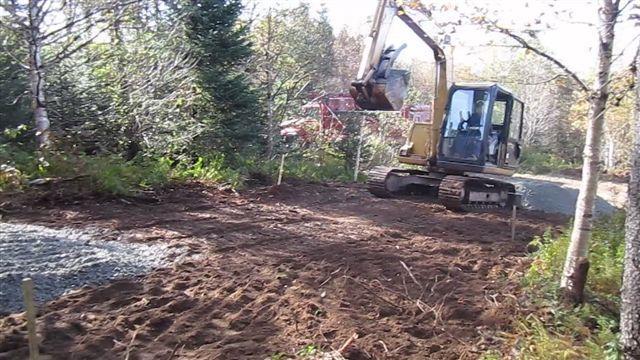