On Saturday, June 5th, the Icelandic Memorial Society of Nova Scotia celebrated the 8th International Trails Day with an annual walk into Markland, the 19th century Icelandic settlement, near Caribou Gold Mines. The annual walk celebrates and commemorates the hardy Icelandic people who called Markland their home from 1875 to 1882. Forty people met at the memorial cairn at the entrance to the settlement before beginning the 8 km hike. In the spring sunshine, the hikers made their way over the old Icelandic road to one of the original homesteads where a picnic, music and camp fire were waiting.

Along the route, hikers enjoyed the fresh green of the hardwood trees with a carpet of ferns beneath, interspersed with lady slippers and star flowers. Stopping to visit some of the homesteads, individuals took a moment of pause to just imagine the hardships yet happiness that the families of this community shared.

At the former Robb's store, a table spread with goodies and cold drinks was awaiting the hikers.

Following the hike and picnic, the group moved on to lot 7 in the Mooseland area, where Johann Magnus Bjarnason author of The Young Icelander, lived as a young boy. The Society was honoured to welcome Manitoba author Borga Jakobson of Winnipeg and her twin granddaughters to this historic celebration. Borga translated this latest book and Errand Boy in the Mooseland Hills, which was published in 2001.

Borga, a petite and strong Icelandic woman of 82, walked in the softly falling rain, up the mossy path to the homestead site of this renowned author. She spoke of the many hours she spent reading about life in Markland and the stories her father, who was a student of Bjarnason had told her when she was younger. She had envisioned Markland as she wrote about it and imagined the tall birch trees by the home they had named 'White Birch Cottage'.

Now, on her first visit, Borga unveiled a memorial plaque to Johann Magnus Bjarnason on the very site of his Markland home, reading both in English and Icelandic. She then read a passage from 'The Young Icelander'.

In this passage Magnus, as he was known to family and friends, returns to his homesite in the Markland village before leaving for good and going west. All of the families have left and the houses are empty, except for one. Magnus walks from cabin to cabin before making his way up the path to the tall white birch tree which towered above his family's cabin.


The cabin is empty, the windows and doors have been boarded up and weeds have taken over the pathway and the garden. Magnus sits down under the tall birch tree and thinks about days gone by. There are only memories left behind and a squirrel skittering about. This was Magnus's last time in Markland.

Following the reading, Marshall Burgess, chairperson for the Icelandic society served cake and champagne in celebration of this wonderful day in Markland.

The Icelandic Society of Nova Scotia is very thankful to Borga Jakobson for the excellent translations which have brought life to these stories. Members of the society and guests who attended were moved by her deep understanding and compassion for these Icelandic people and the memories they have left behind. 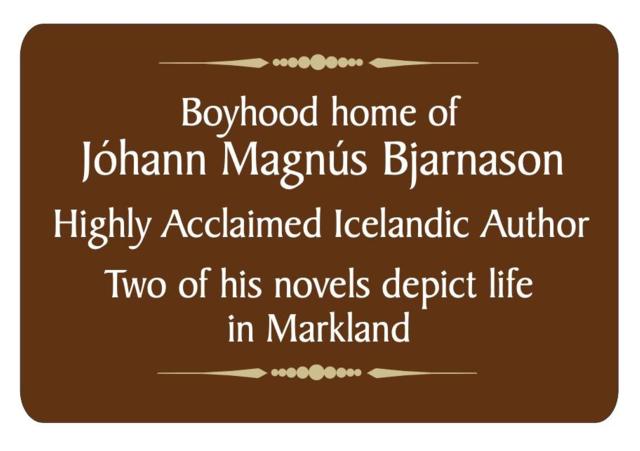