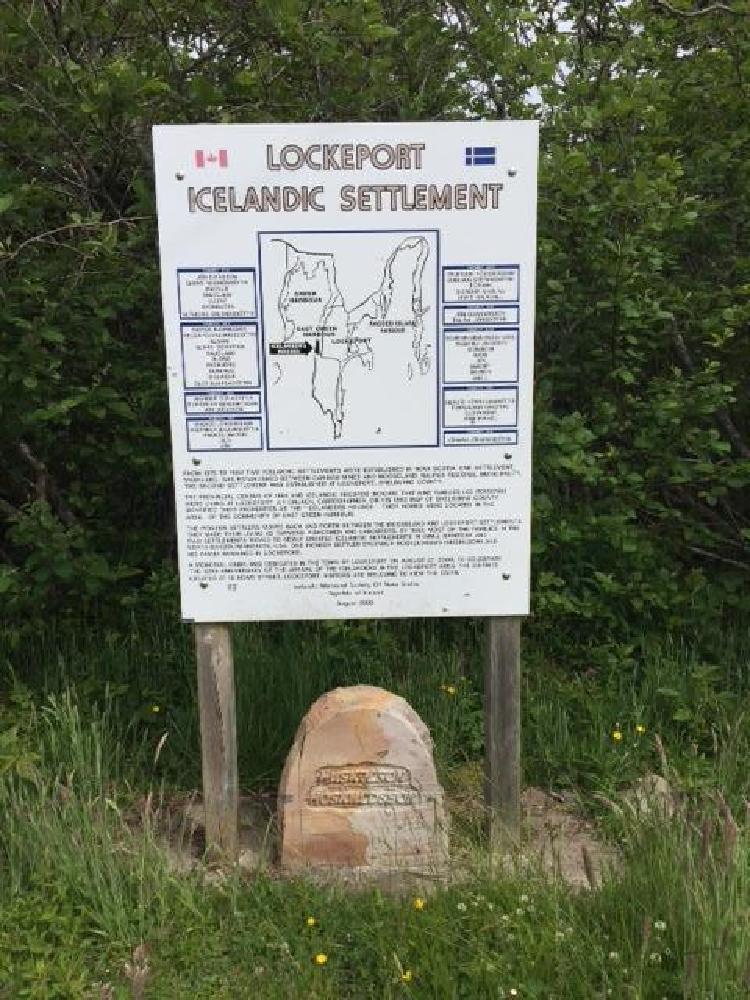 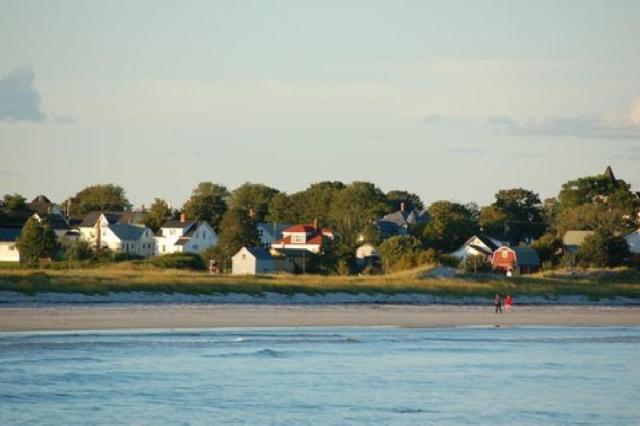 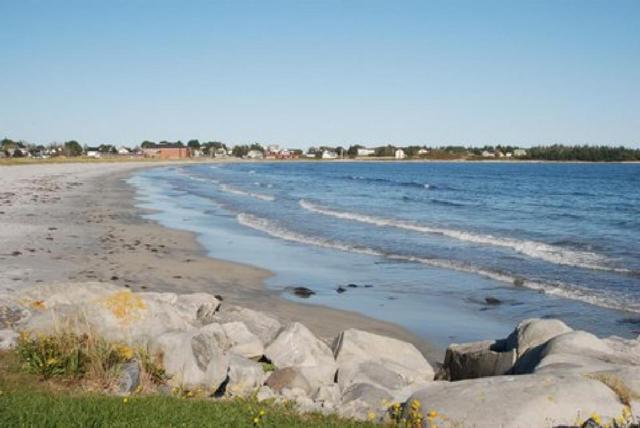 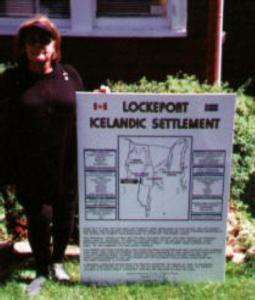 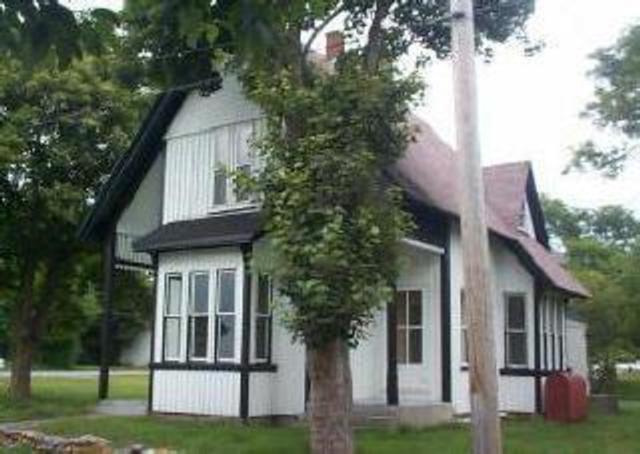 The home of Lewis C. Huskilson 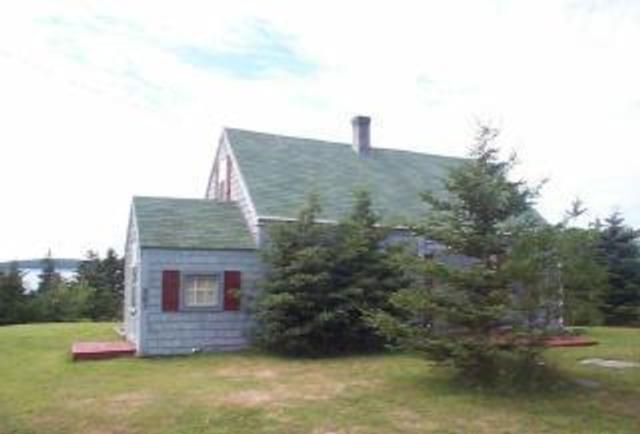 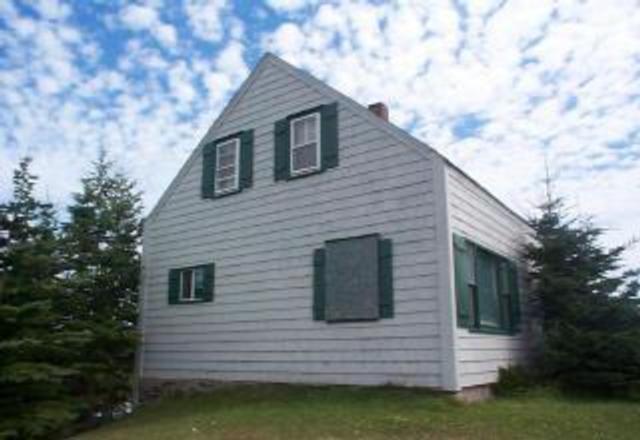 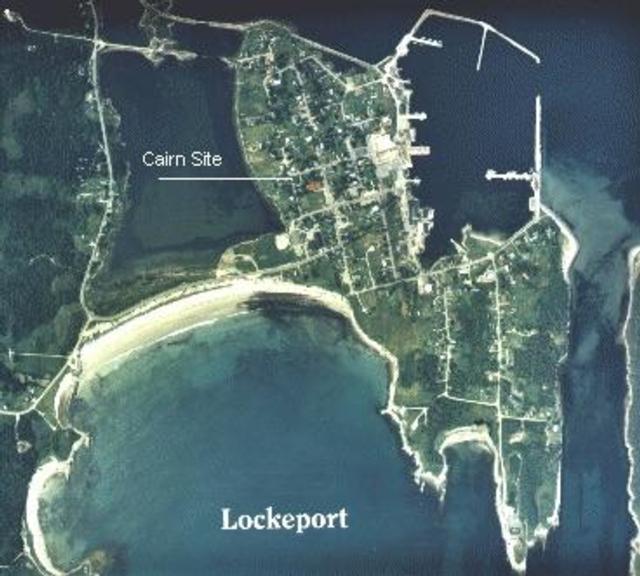 The town of Lockeport is situated about 200 kilometers west of Halifax. It was first settled circa 1760-61 by families from the northeastern states of the United States. Among the first to arrive at Ragged Islands, as it was known then were Josiah Churchill and Jonathan Locke, M.D. The town derived its name from the Locke family.

In the 1800s the town flourished with its fishery and West Indian trade. A lighthouse was built at Gull Rock at the entrance to the Harbour in 1853. The town is connected to the mainland by a causeway which runs the length of Crescent Beach. The town now has about 750 residents. Fishing is the main industry.

With the coming of over 10,000 United Empire Loyalists to Shelburne during the American Revolution, most of the land in Shelburne County had already been granted by the Crown. The Government therefore looked to purchase lands to locate the new settlers from Iceland. The land which they bought was situated a few miles west of the town of Lockeport in a community called East Green Harbour. The second Markland settlement was established there (Lockeport Settlement). The land was subsequently divided into lots of one or two acres each. The Government offered to sell these lands to the Icelanders giving them 5 years to pay at a cost of $25.00. Thomas Robertson, Nova Scotia's Deputy Immigration agent stated in his report that unless the Icelanders now coming are prepared to prosecute the fisheries, the land can be of little use to them.

Dr. Duncan J. Campbell, Nova Scotia Immigration Agent, reported on June 10, 1876, that the merchants of Lockeport and surrounding areas should be consulted as to the advisability of locating more Icelanders in East Shelburne. If they would hire them as ordinary labourers and seamen, the Government would purchase land at Osborne, Green Harbour and localities near Lockeport where land was cheap, erect small dwellings therein, deeds of which would be given to these people by the Government at reduced prices upon payment of a certain sum at any time within the next five years.

In a report dated June 16, 1876 Mr. Robertson wrote that settlers also began to be located at a second Icelandic settlement established outside of Lockeport. He wrote that 20 to 30 Icelanders had moved to the Lockeport area and were renting houses there. They were working at the wharves and stores.

On June 17, 1876, Thomas Robertson wrote to the Immigration Agent in Quebec, L. Stafford, advising that any more Icelandic settlers should proceed to the newly proposed settlements in the Northwest. If anymore wished to come to Nova Scotia, seven families were to be sent by train to be let off at Shubenacadie Station to go to the Mooseland Settlement (Markland). The remainder were to be sent to Halifax where they would take a steamer to Lockeport.
By 1877, the government ceased bringing Icelanders to Nova Scotia. A few families continued to arrive in 1878 and 1879. They moved back and forth between the two settlements looking for work and a place to settle. By 1881-82 most of the Icelandic Settlers had moved out west to the new settlement at Gimli, Manitoba. Others moved to Minnesota and North Dakota.

An act of parliament was passed on April 19, 1884 authorizing the Government to escheat those lands purchased in Shelburne County to settle the Icelandic settlers. The 1891 Nova Scotia census for Lockeport shows Erlendur Hoskuldsson ( Huskilson) and his family as the only Icelandic family still remaining in Nova Scotia. His wife, Gudlag, died in the family home in East Green Harbour in 1919. Erlendur lived with his son, Lewis Churchill, in the town of Lockeport until his death in 1928.

In August, 2000 as part of the millennium celebrations, a memorial cairn was erected by the Icelandic Memorial Society of Nova Scotia and the Republic of Iceland on the property owned by Harold Hoskuldsson.

From August 27th to August 30, 2000, special Icelandic celebrations were held in the Town of Lockeport to remember the 9 Icelandic families (45 souls) who lived there from 1875 to 1882. One family, Erlendur Höskuldsson
(Huskilson) and Guðlaug Stefánsdóttir and their three children, Þorrun (Mrs. John Ryan), Sigriður Nikolina (Lena, Mrs. J. Marshall Burgess) and Lewis Churchill remained.

The Islendingur sailed into Lockeport Harbour at 11 a.m. on August 27th. Captain Gunnar Eggertsson and his crew of 8 sailed from Halifax to Lockeport on August 26th. On this trip were Sarah
Huskilson, Mayor of Lockeport, and Peter Bjornson, Councilor from the Town of
Gimli, Manitoba.

At 2 p.m. a memorial cairn erected by the Icelandic Memorial Society of Nova Scotia and the Republic of Iceland was unveiled on property owned by Harold Huskilson. Erlendur Höskuldsson lived there from 1919 until his death in 1931.

Mayor Sarah Huskilson presented the opening speech. She gave a short history of the Icelandic settlement in
Lockeport. She also noted how the local people went out of their way to help the new immigrants. The Locke family, the founding fathers of Lockeport, were especially kind and many of the pioneer settlers named their children after these families (eg. Jane Locke Nordal, Lewis Churchill Huskilson).

An article entitled "The Lockeport Icelandic Settlement" which I wrote was published in the Icelandic Canadian Magazine (Vol. 55, #3-2000) on this particular settlement.

Speeches were given by Senator Wilfred Moore and Gerald Keddy, MP South Shore, on behalf of the Government of Canada. A message was read from the Honourable Herb Grey, Minister Responsible for the Millennium Bureau of Canada. The local MLA, Cecil O'Donnell, and the Honourable Rodney MacDonald, Minister of Tourism and Culture, represented the Province of Nova Scotia.

Attending the ceremony were representatives from the Republic of Iceland. The Honourable Sturla
Boðvarsson, Minister of Transportation, Communications and Tourism, was the special guest of honour. He was accompanied by Jakob Falur Garðarsson (Special Assistant to the Minister); Helga Haraldsdóttir (Tourism Counselor); Ragnhildur Hjaltadóttir (Department Manager, Transportation) and Magnús Oddsson (Director of Tourism); Svavar Gestsson (Consul General of Iceland in Canada); and his wife, Guðrún Ágústsdóttir. Hans Indridason and his wife, Erla, from Icelandair, were present.

Descendants of 4 of the 9 families who lived in the Icelandic settlement at East Green Harbour, about 2 miles from present day Town of Lockeport, were present and made speeches. Harold Huskilson (son of Lewis and Sarah
Huskilson) and Eleanor Rogers (daughter of J. Marshall Burgess and my amma, Sigriður Nikolina
Erlendsdóttir) spoke for the Höskuldsson Family. Johann Claude and Dick
Thorsteinsson, from Gimli, spoke on behalf of the Jon Eirikson Family. Lorne and Leslie Sigvaldason sent a message from the Nordal Family. It was in Lockeport that this family
(Sigurður Guðmundsson) took the surname of "Nordal" from North River Valley in Iceland. Joyce Grimson sent a message from Elfros, Saskatchewan, from the descendants of the Sigfus Bjarnason Family.

The memorial cairn was then unveiled. The bottom tablet of the cairn is Atlantic Mist Granite found in Nova Scotia. The top tablet of the cairn is a light grey stone (grasteinn eftir samkomulogi) from Iceland. The following verse is inscribed on the cairn in English, French and Icelandic:
"The land to which my work is dedicated is where my children's cradle stands."

A historical sign, dedicated in memory of Lewis Malcolm Huskilson (1911-August 10, 2000), was also unveiled. This sign will be placed in East Green Harbour where the Icelandic homes were located. The cairn and sign were blessed by Reverend John Hammond.
A public reception, with entertainment, was held at Seacap Memorial Park. A special treat was vinarterta flown in from Gimli.

A dinner, with special appetizers from Lockeport Golden Smokehouse, was served at 6 pm at Lockeport Regional High School. The Saga of Guðridur was played before an audience of 250 people. Mr. Svavar Gestsson introduced the play writer, Brynja Benediksdóttir, and the actress, Tristan Gribbin.

The Islendingur remained in Lockeport until August 30th. The public were invited to board the ship in the afternoons.

Other events were held during the first Lockeport Viking Festival while the ship was in port. Fireworks ended the Festival on August 29th. The Islendingur will now head to New York City for celebrations there on October 5, 2000.

The first Lockeport Viking Festival was indeed an outstanding success. Thanks to Krista Peterson, Event
Co-ordinator, and Jennifer MacIntosh and the many other volunteers involved.

The Society wishes to acknowledge and thank the many companies and individuals who helped sponsor this event, including the Millennium Bureau of Canada, the Republic of Iceland, Icelandair, Eimskip Canada Inc., and the Town of Lockeport.